Telekom, Hungary’s leading telecommunications company, introduced an accelerated internship recruitment campaign in 2018, which has become a regular project ever since. The goal is to sign a contract with the best applicants within one 24-hour recruitment program. When recruiters have no significant knowledge about the applicants’ background, selection can be challenging. However, with game-based assessment tools like Benchmark.games, the length of the selection process can be reduced drastically. In 2019, Benchmark.games helped the HR team shortlist candidates and finalize 27 job offers in 24 hours.

Finalists on their first day at Telekom Hungary

Generally speaking, mills tend to grind slowly at large multinational companies. Recruiting is not an exception from this either. Telekom Hungary has proven several times that they are the exception to the rule. Formerly, the traditional selection process was a tedious task during which HR had to apply preliminary filters to loads of candidates and to screen dozens (if not hundreds) of resumes. However, the fresh graduate campaign was built around speed and a data-driven approach, which revolutionized the ordinary process.

Telekom replaced CV screening with a new, innovative method. By doing so, recruiters saved enough time to look at video interviews and focus on the candidates with the highest potential before contracting.

“Today, there is no need for a selection process to take weeks because the digital solutions available to us allow for much shorter recruitment times. Not only that but digital solutions show a more accurate picture of candidates’ potential as they are data-driven and, thus, more reliable” says Zsuzsanna Friedl, Magyar Telekom's Deputy Chief Human Resources Officer.

On 14 November 2019, nearly three hundred students participated in Telekom Hungary's 24-hour-long, unique selection program. The program ended with 27 job offers (instead of 25, which was the original target). 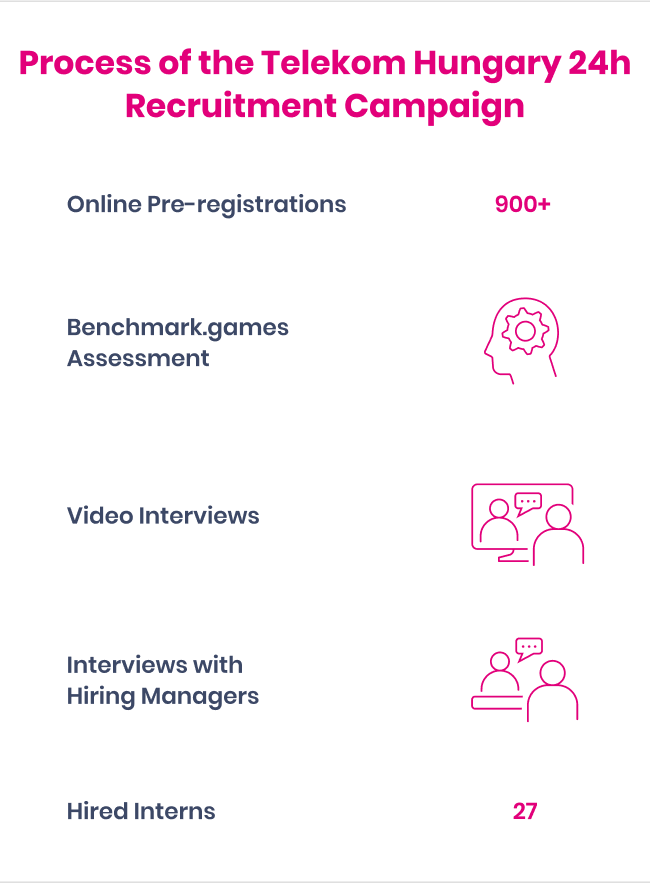 First, the 900+ students who were interested in the program pre-registered. Then, they were required to participate in Benchmark.games’ game-based competency assessment, which measured the cognitive abilities needed for Telekom's internships and was implemented in Telekom’s automated system. Those who successfully completed this round had to conduct a video interview. Then, a shortlist of all the applications was created, which helped Telekom's nine-person HR team to select candidates for the in-person interview and Assessment Center and to finish the recruiting in record time - in a single night.

After the unusual selection process, students were admitted to various professional units: IT, communications, and customer relations. Their work was assisted by a mentor who supported their professional development and helped them with integration. 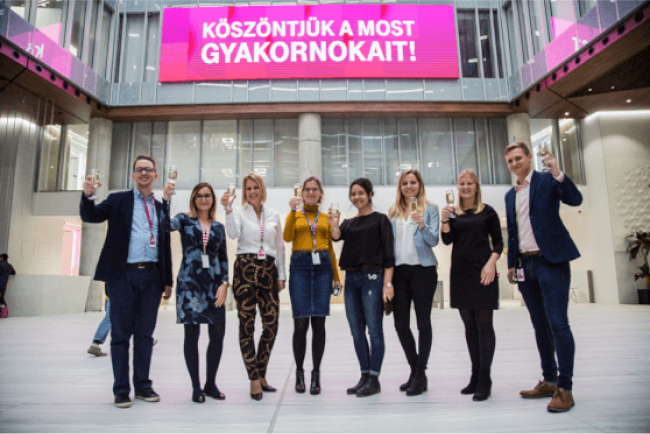 How did the online games contribute to the success of the selection program?

Telekom is at the forefront of employer branding

The campaign was successful from a recruiting point of view and positively affected Telekom's employer branding activities. “The performance and strength of a company is its employees. As a market leader, it is a top priority for Telekom to attract and retain ‘the employees of now’ through an attractive and credible employer strategy” explains Zsuzsanna.

In the run-up to the actual selection day, Hungary's most popular influencers wrote and vlogged about the upcoming event. The company also made a separate video outlining the basic concept of the selection campaign, which spread through social media channels and successfully reached its target audience - fresh grads. 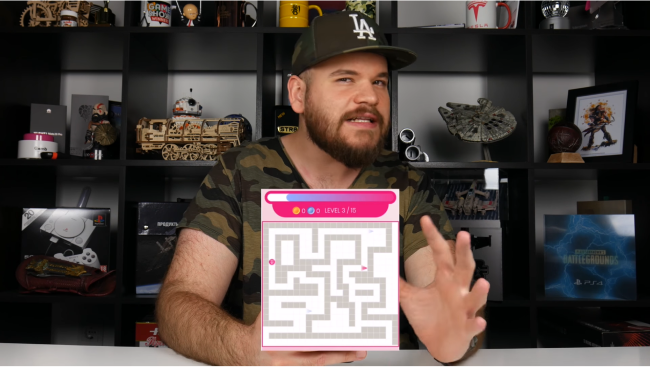 Hunboxing, the Hungarian Youtube influencer is sharing details about the process in the run-up.

“I believe that improving the employee experience gives us a major market advantage. The goal that employer branding serves is to become the employer of choice for candidates who bring talent and expertise" says Zsuzsanna.

In 2019 at the Employer Branding Awards, the aim of which is to recognise the best employer branding practices in Hungary, Telekom Hungary won the “Overall” category and attained gold rating in the “Large Corporation” category.