EVK revolutionizes its recruiting process within a month

EVK is a student-led business college for advanced studies, whose aim is to build a group of exceptional students that are going to be valuable members of the business community in the future. They organize professional events and courses to improve their skills and knowledge in the field.

The college organises on-campus recruitment every year in April-May. However, in 2020 their original process, which took place 100% offline before, proved impossible to organize due to COVID-19 restrictions. As a consequence, the organizing committee needed a new online solution that could help them identify applicants with a suitable skillset. They were looking for a software that could predict how candidates would act in certain situations and how they would fit into EVK’s community as they had doubts about getting to know each candidate online by only using tests and video calls.

With the implementation of Benchmark.games, EVK managed to digitize its process within a month and confidently hired 10 new members based on the knowledge of their in-game behavior.

EVK used to have a totally offline recruitment process, including paper-based tests on the topics of education, general and business knowledge, as well as situational questionnaires. Participants were also given essay questions on controversial topics, tasks they had to solve within 90 minutes. Then the committee had to correct all the above-mentioned components within 2 weeks and choose the 20 best applicants who were invited for an Assessment Centre.

By using this method, the organizers were under pressure to correct and evaluate everything in time. Sometimes it also resulted in subjective decisions on new hires without any scientific tool that could support them.

EVK reached out to us at the beginning of April 2020 expressing the urgency of their situation as their application deadline was at the end of April and their traditional offline recruiting process was made impossible under COVID-19 restrictions. They had to go online as soon as possible, which required a fast response and efficiency both from Benchmark.games and EVK.

Negotiations immediately started, and all the members took the game-based assessment within a week. Zsofia Hidvegi, the main coordinator of the digitization of the first selection round, said that the whole team was really excited to undergo such an assessment and to create a unique EVK benchmark. Every participant engaged actively in the assessment, and based on their in-game behavior, a benchmark profile was created for the college. Afterwards, the applicants took the assessment and they were compared against EVK’s already high-performing members. As a result, EVK could identify whether an applicant would fit into their culture based on the applicant’s in-game behavior.

Additionally, as their original process included paper-based tests as well, we could help EVK implement their hard knowledge-assessing questions into our questionnaire solution. This meant that Benchmark.games’ assessment was automatically followed by these questions and EVK did not have to use another tool as part of their recruitment process. 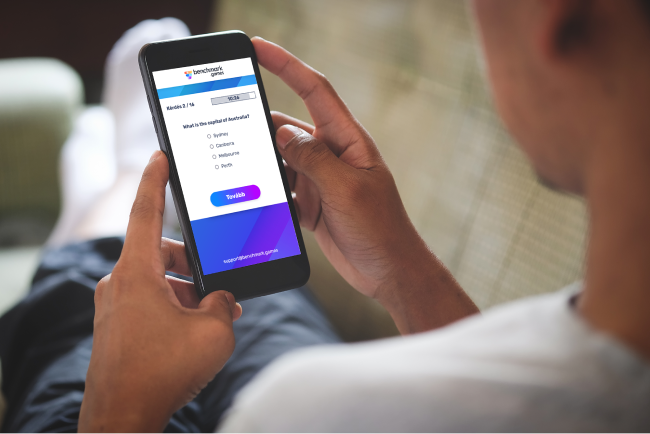 In order to engage as many students as possible in the recruitment process, EVK actively promoted their new game-based first step in their hiring procedure on social media platforms. As first year students were not on campus, it was even more challenging; yet, in the end, their process went viral and they had the most applicants for advanced studies compared to other colleges. Even people who were not eligible based on their studies applied, just to be able to experience the game-based assessment.

Even though the main driver of the digitization of the recruitment process was the outbreak of the COVID-19 pandemic, the recruiting committee revealed that they would definitely like Benchmark.games to remain the first step in the application process in the following years as well. Their eagerness to continue the partnership arose from the fact that the game-based assessments did not only give them insight into the new candidates’ profiles but also helped them stand out from the other colleges.